Approaching the end of the year and up to the rumors about the next generation of Sony Xperia lineup. Some leaked information indicating the alleged characteristics of the tablet Sony Xperia Z4 Ultra.

Sony is preparing the arrival of the new year putting together what will be the lineup of the new generation of devices belonging to the Xperia range about which there have already been several blow in recent weeks. 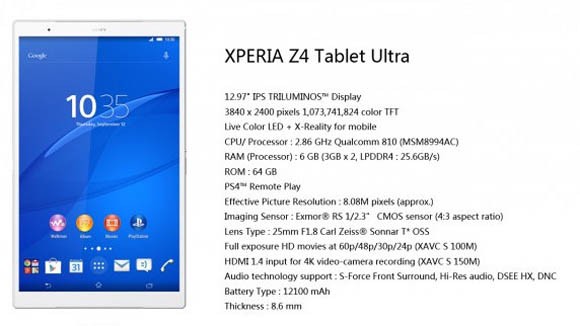 According to the findings, the manufacturer will abandon the bi-annual update to focus on a single offering for 2015. The new generation of Xperia products will, as usual, made up of different devices, both smartphones tablet, starting by Admiral Sony Xperia Z4.

The smartphone will be accompanied by a more compact version, the ‘Xperia Z4 Compact precisely, which will offer features from top of the range in a smaller package. According to recent rumors these features include 4.7-inch Full HD display, Snapdragon chip 810, 3GB of RAM and of course a sensor for high quality camera (20.7 megapixels) and protection against water.

One of the table lineup should reflect some of these technical features but is present in a form far more conspicuous. The said terminal is currently known as Sony Xperia Tablet Z4 Ultra, or at least that’s what I bring to the latest rumors.

If what emerged is true Sony is working on a tablet display with a 13-inch (12.97 to be precise) with an enviable resolution UHD – 4K or if you prefer – of 3,840 x 2,400 pixels obviously with proprietary technology luminosity.

Under the hood would be a chip Qualcomm Snapdragon 810 to 2,86GHz accompanied by the incredible amount of 6GB of RAM and 64GB of internal memory. Not fail also an 8-megapixel camera with Exmor RS sensor 1/2.3″ lens and f/1.8 Carl Zeiss and a battery 12.100mAh that would give life to this hardware configuration monstrous.

The rumor was in fact that of an incredible some of the features are certainly compatible with reality while some details are necessarily taken with a double dose of skepticism.

« BMW a car that is parked with the smartwatch
HP Chromebook 14 G3, the incoming chromebook with touch display and Tegra K1 »