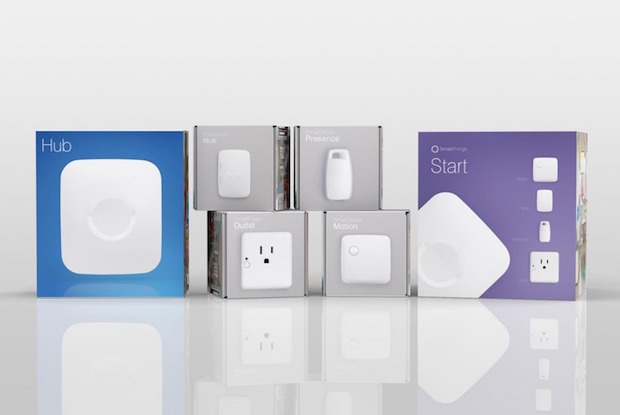 We looked closely at the Hub SmartThings Samsung and we have “played” a bit’.

We have also taken a close look at the license plate automation and Samsung SmartThings the stand of the two companies at CES 2015, and we have seen the level of integration between the present devices and sensors for home automation and our smartphones. If the Internet of Things and home automation have this, then Samsung is well on its way. The sensors know that we are at home and that we left, and the home acts accordingly for what concerns the safety and environmental control. You can literally chat with our house – and has interesting things to say!

SmartThings for home automation at CES 2015, after Kicktarter, the acquisition of Samsung changes the future

The first fruits of the acquisition of SmartThings by Samsung have been unveiled by the Korean at CES 2015 in Las Vegas with the newest version of the Hub, the device for home automation launched in August 2013 after a very successful campaign on Kickstarter.

The new SmartThings Hub, you see it in the picture, pointing to functionality: the processor is more powerful than ever before and now also integrates a battery that will prove crucial in the event of a blackout, as well as a cellular connection that will allow the same to operate in the absence fixed connection.

The processor can allow you to run applications locally without the obligation to lean on others in the network, while the built-in battery and the phone will connect to the Hub to continue operating even in front of a power outage.

Many innovations also in terms of sensors, whose dimensions have been reduced by about 66%, boosted in terms of quality of materials. This applies to SmartSense Presence, SmartSense Motion and Multi SmartSense. Improvements also links with third-party devices, starting with support for native hue of Philips, Honeywell thermostats and cameras Netgear.

The other big news is represented by SmartThings Premium, the subscription service that will, among other things, to send text messages or make calls to a series of phone numbers in case of problems or emergencies, from floods to fires, passing for loss or intrusion.

SmartThings Premium, arriving in North America in April, will also include the ability to automatically save on physical media all recordings of the video surveillance system.