Microsoft Surface Pro 3 is not dead, by the big news for the whole line

Satya Nadella stressed that the project Microsoft Surface Pro 3 will not be abandoned and that, indeed, there will be many new features in the future

In many know that Microsoft Surface Pro 3 is no longer a device designed to test the waters and create public: the first two, Surface and Surface Pro Pro 2, were used to Microsoft primarily to allow its users to experience what it was and what a hybrid would be useful; the point is that the first two products in the line offering excellent performance, but at totally inaccessible to the average consumer, and the result is what you know: an article from Digitimes today spoke of their setback with Microsoft forced to surrender to the poor sales of computer / tablet. 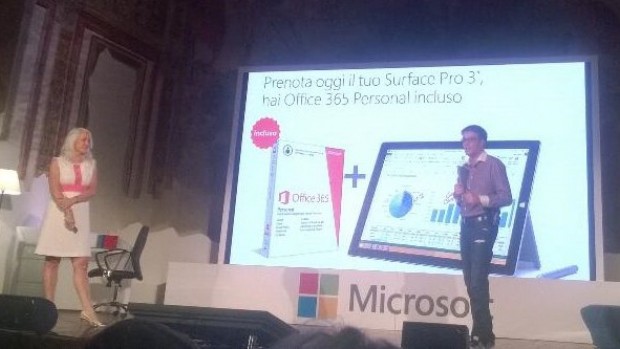 Nothing could be further from the truth, at least according to the latest company because its Microsoft Surface Pro 3 with the Redmond company intends to go beyond the trial, minimizing the defects of a hybrid (eg, portability, which is certainly not the maximum) and putting greater emphasis on the merits.

The pre-orders of Microsoft Surface Pro 3

But it is certainly not a novelty: we had noticed that Microsoft was serious already during the presentation of Microsoft Surface Pro 3, when it was officially announced that if the tablet had been booked immediately, it would have been given the Microsoft Office 365 suite company that needs no introduction, especially if you have followed the dynamics of the agreements between the software giant and Apple .

Everything was made ​​official in Milan: who would buy in advance Surface Pro 3 could make free use of Office 365 for a whole year, and it is not the stuff of nothing, because the costs – remember him – amounted to € 7 per month or 69 per year.

The reassuring statements of Satya Nadella and news

But let’s get to today: Satya Nadella has issued statements which not only contradict what is written by Digitimes on the closure of the project, but reassure all potential buyers of the hybrid; those who purchase Microsoft Surface Pro 3, in fact, can feel comfortable, because the company plans to protect the project in all its aspects, and the following changes represent the clearest demonstration:

After pointing out that its hybrid will prevail in companies, institutions and at schools, Satya Nadella also wrote, in the official blog of Surface , a message that leaves little room for doubt:

“We believe that the power of the Microsoft platform for the enterprise lies in the rich ecosystem of hardware and the applications developed by our partners, the community in general and some of our team. With Microsoft Surface Pro 3 can offer a device designed for businesses that provide high productivity. constantly Microsoft is supporting the program. “

Fear not therefore: Surface line is not dead, and the words expenditures for Microsoft Surface Pro 3 are the clearest demonstration.