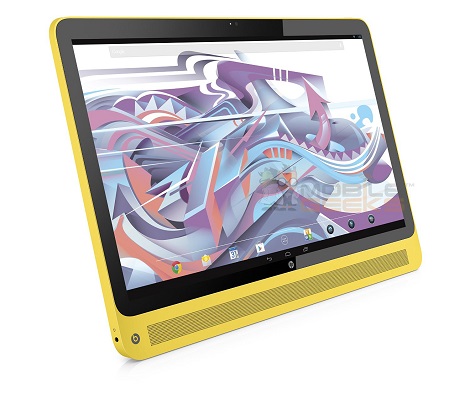 HP is preparing to make a new addition to its lineup of hybrid devices tablet / desktop. The unreleased HP Slate 17 is a large tablet with the proportions of an AIO, based on Android operating system and Intel Celeron Bay Trail.

The category of devices that ensure its foundations in the realm of the tablet and combine these traits to some other kinds of products, such as laptops and AIO, is strangely nourished and proposes a number of solutions with special characteristics.

HP is one of those manufacturers of consumer electronics who prefer this kind of products, and owns several hybrid devices in their lineup. A great example is the HP Slate Slate 21 and Pro 21 whose last generation was presented at the Consumer Electronics Show 2014 in Las Vegas, both terminals with a diagonal of 21 inches width that strongly resemble and function like a tablet systems All- In-One.

Yet another Slate will be the successor of the range ‘HP Slate 17, smaller than its predecessors as the name suggests, but packed with features and features very similar to those of his companions.

The design is very similar to the Slate 21 and, as in that case, the Slate 17 has an integrated stand that allows you to adjust the terminal in different positions, both as a tablet, in fact, that as All-In-One, with angles viewing variables from 120 to 170 degrees. Of course, given the size, more similar to those of a laptop, it will not be easy to handle as a tablet-pc classic.

As for technical equipments Slate 17 below the display 17.3 inch Full HD will make use of a battery capable of ensuring, according to reports, almost 8 hours of autonomy. In contrast to predecessors who relied on a chip of Nvidia Tegra 4, the new Slate will come with an Intel Celeron processor N2807 belonging to the family Bay Trail.