The company Ractiv, having passed a crowdfunding project, has developed the gadget Touch +. This will allow any surface we want is a multitouch controller using any computer that can handle the most comfortable way possible. 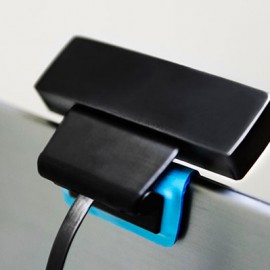 When Kinect came out, but ultimately not as many people as expected was him, it was a revolution. Many people were fascinated by the possibilities this could see, but not be too practical and useful when playing video games, as many of us are so used to a command or a keyboard that is very difficult to break with that the overnight.

The same could happen with Touch +, although it has some differences from Kinect. It is a equipped with two VGA cameras gadget whose mission is focusing on the surface you want, capture the movements made ​​by the user, and applying all these movements to the screen; thus control our computer using any surface you want to put Touch +.

Furthermore, this gadget multitouch features a light that you can activate in the event that the surface where you are working is low visibility, helping us to work on the surface and that this better captures the movements we are doing and you will have to play. Touch + is compatible with Windows, Mac, iOS and hopes that soon, also works with Linux or Android. Regarding the price, one can get with it, more or less, 56 euros, which does not seem excessive when you consider that you can change the way we face the computer. Without thier, if we want to with it we have to hurry, because its availability is limited.

« Noke: Bluetooth clasp secures the bike and turns in the key smartphone
SilinCode SOS, the gadget that will help you »