All ‘IFA 2014 Berlin Toshiba has made ​​sure to note a lot, but has not failed even to present products rather interesting talk about Chromebook Satellite Radius 2 and 11, the first of many that a Chromebook will arrive this year; the second is a notebook that could appeal to more than one person, as it turns in five different ways: we do not yet have all the details at our disposal, but it seems that Toshiba has done a really good job. Proceed with order. 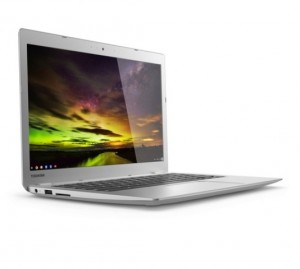 Toshiba Chromebook 2 has a 13-inch display and a light weight: the computer – think – arrives just 1.3 kg. Also good resolution, greatly improved: it goes from 1366×768 to 1920×1080 pixels of the previous model. The rest of the sheet is not completely unknown: we speak of a Bay Trail N2840 processor, well matched with 4GB of RAM. The all sold to October in America in only 330 dollars, that is to say even percent more than the 250 requested for the first Chromebook Series; in Europe – for those interested – the output period is the last quarter of the year.

As regards the second novelty, Satellite Raidus 11 is certainly a nice notebook: it is a convertible from 29.5 cm which turns into five different modes, in order to adapt to the different needs of users. Here’s what we learn from the company’s official site:

“The word mobility can mean different things to different people and the new Satellite Radius 11 and Toshiba Satellite CL10-B reflect this concept perfectly,” said Sandor van der Ham, Vice President, B2C PC, Lifestyle Products & Services Group, Toshiba Europe GmbH. “By developing these devices adaptable and based on Windows 8.1, we conducted a series of affordable notebooks that give you the flexibility and freedom to do whatever you want, wherever you are and without compromising on design, performance and innovation . It is the mobility, just as the individual chooses. ” “We are pleased to see this innovation from Toshiba, the Satellite Radius 11 integrates the hardware that Windows 8.1 was designed for the Cloud and mobile world,” said Peter Han, Vice President, Worldwide OEM Marketing. “With five different modes, provides the necessary flexibility for the whole day in the office, at home and on the go.”

There are no information on price and release date, but we will not fail to update you as soon as we become aware of.