The New Browser For Windows 10 is Finally Called Spartan

Today was day Build 2015 with the introduction of all the new-for Developers- of Microsoft. As expected we had news about the new operating system from Microsoft, specifically with your web browser, if it would come to replace criticized Internet Explorer. 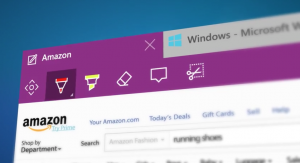 Since the first presentation of Windows 10 by Microsoft, we always talked about Project Spartan as the new web browser from Microsoft for Windows 10, and that name began to be accepted and amassed by many technology blog, almost assuming that It would be its final name. Well, today in Build 2015 Microsoft announced the official name of the replacement of IE, and is not exactly Spartan as we all thought it would be.

Microsoft Edge, this is its final name and is a new browser that will be the default browser in Windows 10. Although this operating system will have built-in Internet Explore even for backward compatibility, especially in companies that often use IE9- Edge is expected to improve the use of the Web for Windows 10 users.

Edge is a browser developed from the ground up focused on being compatible with different devices, especially for devices with touch screens such as smartphones or tablets. One of the features focused on touch screens is the option to take notes and make cuts to export to other applications.

The new Microsoft browser will follow the trend of the most popular browsers and extensions that deliver more integrated tools to the user and the mind off the TV experience that IE is always criticized, in short, Edge brings to Windows 10 so Microsoft should be integrated for years in IE. We may also see this browser interaction with Cortana assistant, showing information on certain web pages, such as addresses or contact forms business pages.

« Pipo X8 is a mini-PC with integrated touch display
Forget toothpaste, soon only we need a brush with nanotechnology »