Researchers and engineers Ames research centrer NASA recently completed the first test flight of a drone built with organic materials that can dissolve if necessary to remove the trace of its presence.

As Ames Research Center, one of the largest and most active research centers of the National Aeronautics and Space Administration of the United States, is working on a drone scout with connotations really special, designed for missions most delicate and sensitive and designed to be completely biodegradable. 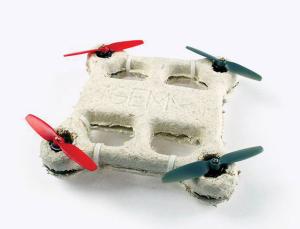 The technology of the drones, small unmanned aerial vehicles, is becoming more common even at the level of the consumer market, and although the regulations in most of the Western countries do not allow to use, without restrictions, it is not difficult to see them used in many different tasks, from video surveillance to precisely research.

In this case the NASA aims to something more specific than just aircraft for video but has designed a cutting-edge device constructed in organic material: the first “drone organic”.

The largest part of the aircraft is produced in mycelium – a mass of filaments which constitutes the vegetative part of a fungus – material that can be produced and grown in a laboratory giving it various forms and can be applied in various fields, such as packaging .. The frame, in this case, was produced by Ecovative Design, a company of Green Island in New York.

A cover of this layer have been used sheets of “skin” of cellulose grown by bacterial culture, and which in turn is covered with the same material that the wasp cartonaia uses as waterproof layer to its nest. The circuits, finally, are printed with silver ink nanotechnology.

The idea is to use the drone to the exploration of remote areas without the risk of contaminating the environment or to monitor important areas by reducing the risk of betraying the surveillance activities.

Currently not all the drone is made ​​of biodegradable material, though: blades, battery and controls were transplanted from a drone traditional factor that defeats the purpose of the project, and researchers are working to make degradable also sensors.

« An anti water layer could be the key to cleaner energy plants
Prynt turns smartphones into Polaroid, new beautiful project to $ 99 »