Posted in Technology, Update NEWS by admin on 04 December 2014    Tags: copy of a worm, digital animal
Tweet
Pin It

Create a virtual animal is a big challenge. No, we’re not talking about creating virtual pets for our entertainment but creating artificial life that operates autonomously and may come to have even own awareness of their existence. Sounds like science fiction but it is what the creators of Wormbot want to do. 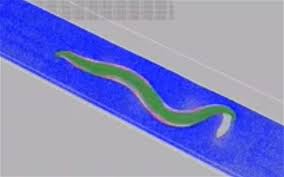 Under this name we find an artificial brain that has the same number of cells that the brain of a nematode. The structure is the same but instead of having a body 95 composed of muscles, Wormbot has a plastic housing and two wheels.

A virtual worm to understand your brain

You will not be able to eat, defecate, die or reproduce, those functions shall be borne by one that will come out soon called WormSim version. A fully digital model where each cell of a nematode will be recreated in a virtual environment.

The reasons for choosing this nematode worm are casual. It has the simple brain known to science and was the first agency of its genome and the brain map was obtained. 959 is a network of cells and neurons 302 6393 connected via branches.

Knowing how well does it produce an avatar of it more accessible than other species. While OpenWorm seeking funding on Kickstarter, WormSim is already in development and has created the muscles and brain for once done, launch the virtual waters to see how it moves.

If you are interested in Kickstarter you can spend $ 49 and get your own virtual worm and see how it behaves. All data generated are freely available and can use them as you like. Now why is this interest in doing a virtual animal?
If we assume the challenge is to create a form of purely virtual life acting like a real animal, we have a compelling reason to justify this research . To all this we must add the study of a neural network and see how all taking greater control of information. In fact, although it has mapped the brain is not yet certain how it works in this species.

« HP 10-inch tablet, so the company focuses on the business sector
Goodbye iPhone 5c, Apple would halt production in 2015 »