Samsung is preparing to update its line of laptops Ativ with the new laptop Samsung Ativ Book 9, 2015, a device name from consideration but from ultra lightweight, ultra thin, fanless.

Through its lineup of portable PCs called ATIV, Samsung has produced excellent competitors in the field of laptop devices certainly not cheap but capable of offering a higher quality in terms of both design and construction both as regards the experience of using. 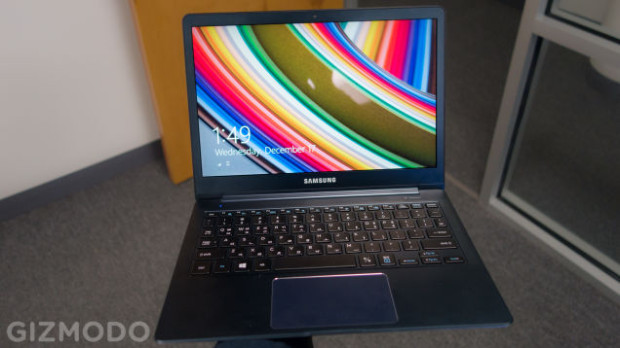 The main opponent, what to target, are obviously the portable ultra-thin Apple MacBook Air and Samsung for 2015 seems willing to take a small advantage. The next item that will be added to the family Ativ will have the long name of Samsung ATIV Book 9 2015, and seems to be able to assert themselves.

Aesthetically the Book 9 2015 respects the previously set by Samsung for the lineup and is not far from the look of his predecessors. It is a PC with 12.2-inch display with high resolution – smaller Ativ Book 9 of 2014 – and an aluminum frame looks more than pleasant.

The Book 9 2015 is extremely thin and light, measuring just over 12 mm thick and weighing less than 1 kilogram, and has a fanless configuration. Samsung has been able to get this extremely thin due to the use of an Intel Core M 5Y10c belonging to the family Broadwell composed of hybrid processors for use in high-end devices. The resolution of 2,560×1,600 puts also a step ahead of the competition.

Other features include 4GB of RAM and a 128GB SSD, features expandable to 8GB of RAM and 256GB SSD with a price increase, as well as a battery that promises a range of 10.5 hours, useful to give support to the mode “Outdoor” that can duplicate the screen brightness.