Leaked on the net a few photographs, results of benchmark tests, and detailed information on the new Nvidia GeForce GTX 970 graphics card high level that will be presented in October along with the GTX 970.

Nvidia is ready to present to the public its new line of video cards at the top end. The company based in the United States, known for graphics processors, in a few days will hold an event called Game24 that will host demos, interviews, competitions for eSports and, above all, the unveiling of the video cards GeForce GTX 970 and GTX 980. 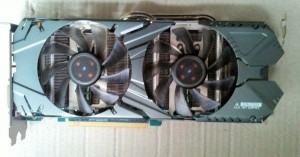 The manufacturer of electronic components has decided to skip the name for the new GTX 800 series, wanting to keep separate the lineup of desktop and mobile components called GeForce 800M.

GeForce 800M: this GPU for laptops and notebook from her a kind of technology that will surely please those who work with their laptop, the new feature Battery Boost.

The GTX 970 have been leaked on the net a few pictures that show live as well as some screenshots that refer to the technical specifications and performance of the graphics processor.

According to the results the GTX 970 should not consume more than 190 watts and will support the standard HDMI 2.0 while as regards the assembly the Galaxy card seems to exploit a connector pin 6 and 8.

As regards performance, finally, the benchmark test performed with 3DMark 11 Extreme provides some preliminary data showing the score X3963 obtained in combination with an Intel Core i3-4130, little lower than that obtained from the GTX 780 Ti.

« Accessories and designer chic, but not only, for the tablet cover ADJ Supra
How To Do Internet Marketing SEO »