Dane, Malamute and Pro 408 are the tablet that HP will at CES 2015: FCC certification came in the last hour

The new HP tablet are still partially shrouded in mystery, but we are already able to tell you something, since they have received FCC certification: we have at our disposal, in short, official information and absolutely not deniable. Let’s see the first details, assuming that we are talking about devices that mount both Android Windows is not exactly unknown (some names had already been leaked on the net some time ago). 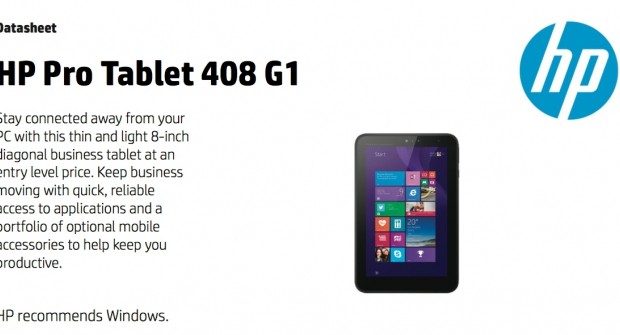 The presentation of all three tablets will be at CES 2015, which most likely will be shown to the public: the tablet market is booming, and prices are all falling dramatically, so it is likely that these tablets will not exceed a certain threshold (the we hope, at least).

The first two were simply certified: B94HHC412DC codes and B94HHC408M, HP and HP Dane Malamutes are two tablets of 8 and 12 inches that should fit both Android. The other, HP Pro Tablet 408, mounts, however, one 8-inch screen and Windows as the operating system; we became aware of the technical specifications and main features thanks to the FCC, where we note the presence of an Intel Bay Trail (Z3736F), a screen with a resolution of 1280 x 800 pixels, 2GB of RAM and 32/64 GB internal storage expandable. Including the prsenza two cameras, a 2 and an 8 megapixel camera, and an Active Pen as an optional accessory. The battery, finally, is equal to 4 thousand 800 mAh.

This tablet is definitely mid-range, so we get the impression that it is the second, for performance, the kind that we discovered: we will update after CES 2015.