The Motorola Moto 360, one of the most awaited and anticipated electronic gadgets of this year, is shown in a photo shoot complete. The images highlight the excellent design, the metal frame and the wireless charging system.

What is taking place among the most popular manufacturers of consumer electronics is a battle that is fought rather turned on in the field of wearable gadget. We know that Motorola has all it takes to come out triumphant and is by no means a low level of expectation surrounding his particular ward, the Motorola Moto 360. 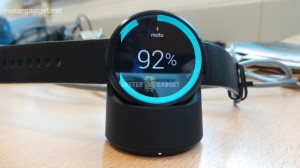 The smartwatch are no longer a novelty but the category has not yet been completely established on a commercial level. On the other hand the number of contenders is increasing rapidly, and soon we will see how to get the new iWatch, whose arrival is scheduled for December.

The Moto 360 has already appeared several times between rumors and rumors, promotional images and video, and we finally have the chance to see it again in a whole set of high quality photographs.

The smartwatch by Motorola will not be plastic and not a gadget will prove to be cumbersome and conspicuous indeed, judging from the shots, looks like a real gem.

The American company has focused much on the aesthetics of your smartwatch and, in fact, the metal frame from the round design and charging system wirelss again we see in the images give a certain value to the device.

The watch is of course waterproof – IP67 certified – and Motorola has equipped it with, among other things, a sensor for the heartbeat. So it’s a very dangerous opponent for all health tracker and smartwatch bulkier and less aesthetically pleasing as the ‘LG G Watch.

There is still no definite information on the price of the Moto 360 nor the possible launch date which will take place in an undefined time “after the summer.”

« SilinCode SOS, the gadget that will help you
HTC Volantis, technical specifications online, is this the new tablet! »