Today we present a new notebook: it is called HP Stream 14 and will undoubtedly like to more than one, not only because the company is one of the best in the business sector but also because the hardware is very good; shame about the price, which has risen significantly compared to the standard, after the arrival of the notebook in Europe. 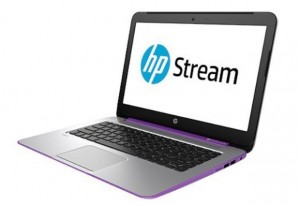 The announcement of this HP Stream 14 was made ​​a few days ago and now we thought – it was obvious that he was, after all – a killer Chromebook, ie a sworn enemy of the Chromebook, since HP Stream 14 mounts Windows 8.1.

We said that this data sheet is really good, and in fact the following technical specifications, a device intended to be at the low end, are far from satisfactory:

The starting price was very good, in line with those of Microsoft (which – as you know – has inizito a kind of campaign “199 dollars”): they left their classics by $ 200, which then came to 229 pounds with HP UK, ie to 368 dollars; the price, in short, has increased significantly and the only hope is the spread of mass prediction that certainly we do not dare to do.

« The Very Best In CMS For Developers
Accessories and designer chic, but not only, for the tablet cover ADJ Supra »