Fitbit has three new gadgets wearable dedicated to fitness-tracking. The Fitbit smartband Charge, already introduced in the market, will soon be followed by the detector for heartbeat Charge HR and more complex smartwatch Surge.

Fitbit is probably the most influential producer in the field of electronic gadgets for sports and fitness tracking, closely followed by companies like Jawbone. The products of the company in San Francisco are quite popular and recognized and proposals are undoubtedly interesting. 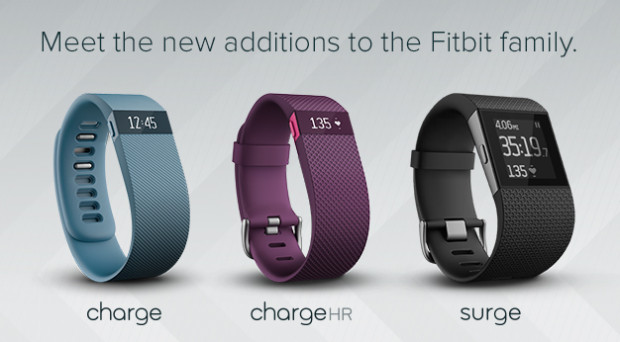 In recent days rumors on the arrival of a new generation of products Fitbit and finally the rumors have materialized. The Californian manufacturer has revealed the existence of not one but three new wearable gadgets that will go to expand its portfolio: Fitbit Charge, Charge HR and most powerful Fitbit Surge.

The cheapest of the three, Fitbit Charge, will be the first to arrive on the shelves and its introduction is scheduled for this fall, in time for the winter holiday season. The Charge offers some more features than the Flex given the presence of a small OLED display but otherwise operates as a canon Fitness-tracker. The smartband keeps track of the steps, measures the quality of sleep and offers a set of basic data for evaluating the consumption of calories and exercise during the day. The range is 7 days and the starting price will be about $ 130.

The arrival of Charge HR is planned for the first few weeks of 2015 and, on paper, looks like a gadget quite accomplished. Compared to Charge, the Charge HR door in addition a sensor for the heartbeat that will be able to constantly monitor this aspect, not only during the physical activity but also during sleep. This factor makes it able to perform measurements also during physical activities more static where the accelerometer does not enter into play.

Fitbit promises a charge period of 5 days and the cost basis in this case is $ 150.

As anticipated by rumors, Fitbit has also created one smartwatch that will reach consumers in 2015 as the Charge HR. Smartwatch perhaps not the most appropriate term because, rather than on notifications and synchronization with a smartphone – functionality obviously present – the Surge course focuses on fitness.

Equipped with an LCD touch screen, this gadget is equipped with GPS – a feature strongly appreciated by race fans – as well as the detector of the beat and all sensors already available on the models Charge.

Also in this case the autonomy promise is to 5 days (significantly reduced in case of use of GPS) and the departure cost will be of 250 $.

« Telepathy exists: it shows a “hello” from India to France
The review about EaseUS Todo Backup Free »