Earthquake in the Napa Valley, new technologies have expected with 10 seconds of advance

In California is being experienced early warning system for earthquakes. The recent earthquake in the Napa Valley has been provided with 10 seconds of advance, an amazing result.

The recent earthquake in Napa Valle y was a proving ground for new technology that is gradually being installed in California, and you will be able to raise the alarm with a certain advance on earthquakes. 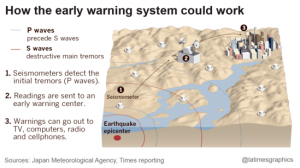 Some Berkeley scientists who work on this project, which has been christened ShakeAlert, released a video that demonstrates its efficacy, however limited: the alert was sent with 10 seconds ahead of the earthquake of magnitude 6 that is unleashed in the most famous wine of the west coast of the United States.

It will take many more years before the system is completed, but when the sensors will be placed in the correct way, geologists predict that the notice of the earthquake could be issued with 40 or even 50 seconds in advance. Let’s talk about the short term, sure, but are they sufficient to secure outdoor family, before the building starts to shake.

These 40 or 50 seconds would then be viable if the Big One hits Los Angeles. Would be sufficient to open the doors of remittances fire engines fire engines, to stop the trains, to stop the elevators on the first floor available, in securing a patient during open heart surgery.

Although it may seem absurd, grotesque and surreal, this system of “early warning” is being installed very slowly because of a lack of funds. In our eyes of Italians, that is, people who live in a land in constant danger symbol, it seems ridiculous at the same time and perfectly understandable that the authorities and the private sector are not able to see a few inches from your nose into a situation that could escalate to ‘ sudden. The point is installing a similar system would no longer be “suddenly”.