Cheetah, the robot that jumps obstacles and lands perfectly

Cheetah is certainly not born today, but it is only recently that he learned to jump over obstacles 40 cm.

We talked about that and today we are here to update you, as the cheetah robot Cheetah evolved. Yes, you read that right: even robots make their strides, and today Cheetah is able to not only run faster but also to detect obstacles in speed and jump them the algorithm that controls, in fact, it has been improved and enhanced in some places, then it made more precise and suitable to what the robot was supposed to do. 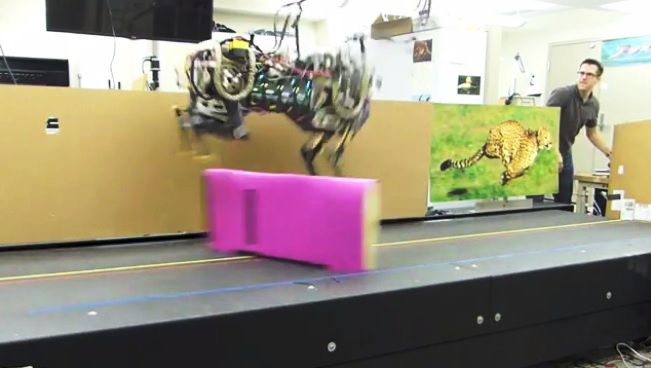 According to what the company says, it is the first robot able to behave in this way: as you can see in the video that we offer and as you will read in the same source, the obstacles that Cheetah can jump are 40 cm high, and them jumps very well, by the way, as it seems almost not a robot as he runs fast and without any protection: the movements are in fact enough fluids; In short, the work of researchers is really appreciable: balance and energy, as well as management of the landing after the jump, make this one of the most beautiful robot and offering performance seen so far.

The algorithms that move Cheetah

About Cheetah was installed LIDAR, a system of terrain mapping in real time also used for cars without driver: this system is based on three algorithms that communicate to the robot the distance to the obstacle and its size, obviously after having detected; where they must be the legs before jumping; Finally, the force needed to overcome the same obstacle: continue the work, but I would say that we are very well advanced.

« Skype Web (Beta) is available for US and the UK
Samsung Galaxy Tab S2 photos and rumor on technical details, price and output »