14 uses of drones that sure did not know

Posted in Technology, Tips and IDEAS by admin on 09 September 2016
Tweet
Pin It

A drone is an unmanned aerial vehicle (UAV for its acronym in Spanish). Currently it has different functions that are essential in society, from commercial proposals to rescue people.

To understand Creole, a drone would be like the classic model plane but much more sophisticated. Its design with cameras, GPS and sensors of all types, was initially developed for use in military circles, like spy missions and even war carrying missiles to fire at target drones.

In recent years, thanks to manufacturing prices declined, the use of these aircraft was expanded and we have this technology to other more noble functions such as scientific research or entertainment. Consider buying a drone is 60 times cheaper than a helicopter and many operating costs are lower.

Drones are handled with remote control (joystick type) or through applications for smartphones or tablets. There are currently different app developed for iOS, Android and even Linux to fly a drone, take pictures and film. Companies engaged in product development aim to do more and more intuitive and easy to use for everyone.

Up to date, they have won several functions within society and others which are in full phase of experimentation.

Here the tasks so far were tested with drones:

We saw in the last football World Cup in Brazil flying over the court, showing from above the game with the best angles, like no other camera could. Concerts, fashion shows and even protests are captured by these mini helicopter advantage can fly lower and closer to the people than a real helicopter and has much more room to maneuver than a boom. Drones open up a whole new range of possibilities to photojournalism and filmmakers. 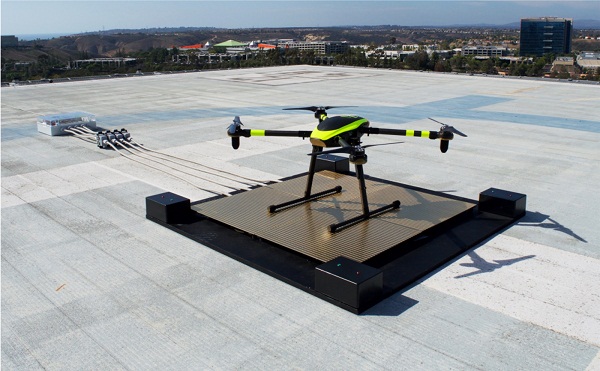 This really looks like science fiction: In Russia and Israel drones are already making pizza deliveries. In China, the company makes SF Express Mail shipments through small helicopters. United States, this time stayed behind in the trend as Amazon, one of the largest e-commerce companies in the country, he released a video promoting the product shipment in 30 minutes thanks to a drone. However, since the same company noted that this will not be possible at least for the next 5 years as current legislation does not allow it.

Drones are noted for their effectiveness in extreme situations, especially in areas that were isolated or difficult to access. The importance of their use was demonstrated for example, in areas that were hit by natural disasters. Their flight speed can explore vast areas in a very short time. Allowing take the necessary assistance, blood bank transfer or at an earlier stage to assess the necessary assistance in the area or shape of arrival to the place.

The ability to fly low along with a high quality camera that transmits real-time, allowing immediate recognition of losses in forests or mountains, for example people. In Spain was developed, Life seeker, an integrated drones that allows them to connect with mobile phones that were no signal and report their exact position system.

In Argentina the government echoed this technology and are used UAVs to fly over land were declared to the tax authorities as vacant. The area overflows and confirms whether or not they are built.

Spain begins to use them through the Civil Guard, to control maritime revenue. The United States also is evaluating its use to control the Mexican border and thus deter potential illegal immigrants and drug trafficking.

Farmers are you getting a lot out drones because they use different functions:

– On the one hand, thanks to photos and HD video allowing built GoPro enables monitoring of large dimensions that would otherwise be impossible to walk. This equipment can travel over a thousand hectares in just one hour allowing early location of pests or weeds.

– On the other hand, these unmanned ships are used to control the herd.

– Also used with real estate purposes, gives farmers the opportunity to show exactly the characteristics of a property in a few minutes.
Finally, in Asia it is estimated that there are about 2400 drones used to spread pesticides and fertilizers in large rural areas.

In Spain the first UAVs specifically designed for the prevention and control of forest fires were created. Your task is to gather the information needed to anticipate where possible prevention and fire spread.

They are used to find and analyze archaeological remains thanks to its ability to travel and take pictures of large areas. In Peru UAVs were used to study the ruins of Cerro Chepén garnering more than 700,000 photographs in just ten minutes, nearly 50 times more photos than those obtainable by other means.

Worldwide drones are used to access hazardous areas for humans. Such is the case of volcanoes. Drones are able to take samples from inside the volcano and ash emitted, allowing predict eruptions making more advance warning to nearby towns. On the other hand, that information is also used to deepen the study of scientific research center of the earth.

They have used these drones to reproduce the path of wild birds. Flight with GPS built the bird and then played with a drone is recorded. Researchers can thus determine why the animal tour to be able to accurately record the characteristics of the area where it flies.

As mentioned, the drones are used for tasks that are too dangerous for humans. Allowing handling, cleaning and study of materials harmful to the health of people. In Japan, more precisely in Fukushima, drones were used to obtain an accurate inside the nuclear reactor with the aim of developing a cleanup plan and prevent future leaks view. The use of unmanned aircraft in this case was critical because it could access areas that no human being could tolerate given the high level of radiation in the area.

The possibility of using drones to create internet networks in areas not yet reached investigated. These drones would work with solar energy and could fulfill the tasks of the satellites but cheaper and in a specific coverage. This is also important to know that drone charging station is now available so uses of drone will be more frequent then before. Check this site also http://merchantdroid.com/

How could it be otherwise the drones are preparing the ground for future games? Allowing capture actual pictures of the different stages of the world and not like so far, interpretations of landscapes. What is certain today is that there are models available for fans of model airplanes. With a fairly affordable price, these ships come with cameras of very good quality, and very easy to maneuver from any smart device.

Drones are here to stay, they use seem to increase every day by the hand of civil and scientific population. We are experiencing the boom of creativity in features and applications of this device, which seem truly endless. Probably one day with the advancement of technology, these fascinating ships will allow us to explore areas off the planet and as far as the imagination.